InDeWaG is the acronym of title "Industrial Development of Water Flow Glazing Systems" - Innovation action project funded under Horizon 2020, a Public Private Partnership on "BUILDINGS DESIGN FOR NEW HIGHLY ENERGY PERFORMING BUILDINGS". Support for innovation is provided to actions where partners focus together and join forces to remove existing barriers through market uptake measures in order to build capacity and provide support for sustainable energy policy implementation. Their mission is to foster sustainable energy investments and the uptake of technologies relevant to energy efficiency in buildings.

InDeWaG establish new technical knowledge and explore the concept of a new improved technology and product. Demonstration activity will show technical feasibility in a near to operational environment. InDeWag project introduce a new, disruptive building envelope system which has at least 15% building cost reduction potential and could be brought to industrial ripeness. The unique approach of InDeWaG is to enable maximum use of daylight by a transparent glass façade and at the same time meet nZEB performance. The consortium will undertake a quantitative analysis of different "modular" approaches: the active fluid flow glazing will combine water as heat transfer media with compressed air and solar-thermal energy conversion with BIPV (Building Integrated Photovoltaic), to enable the optimal ZEB performance for a multitude of building types in different climates.

The ambition of InDeWaG project is to bring to industrial ripeness a façade and interior wall system based on radiant heating and cooling glass surfaces made from water and/or air flow glazing, abbreviated as WFG and AFG, which harvests solar energy for various use at large scale. Such building elements will be made ready for commercial application in the building sector and will be designed to become easy adoptable for 21st century façade and overall building technology, especially for cost effective ZEB technology with increased daylight use, variable ventilation and individual control comfort. The benefits of fluid flow glazing façade technology were proven over the past 8 years on the level of few demonstrator projects, but there are still many difficulties for the right practical implementation.

The concept for extending the State of Art in water flow glass façade systems is oriented towards a system that will be able to satisfy the cooling requirements and the hot water needs for a whole building. This is achieved through the integration of a series of transparent, translucent or opaque solar thermal absorbers which operate at different nominal temperatures, namely 30ºC for heating and seasonal energy storage, 60ºC for sanitary hot water supply and 90ºC for cooling through absorption chillers. In this way, a complete glass curtain wall façade will be able to deliver all the levels of thermal energy required by a building while retaining its architectural aesthetics. In addition, implementation of radiant surfaces inside the building will be investigated by building simulation with IDA ICE and TRNSYS. The components will be tested in Demonstrators situated in two different climate zones - Bulgaria and Spain.

A proven design method, a tested and certified façade system unit, application possibilities and a focused market analysis are crucial for the fast market uptake of the Fluid Flow Glazing. The industrial development of this exciting façade technology is the main goal of InDeWaG consortium, enabling an important step forward towards achieving nZEB standard /stated by the 2020 EU policy in the Directive 31 from May 19th 2010/.

The main objective of InDeWaG is to develop an industrial technology for fabrication of cost affordable general-purpose Fluid Flow Glazing façade elements, which give maximum daylight utilization and maximum interior comfort at energy consumption level of nZEB. In addition, also interior radiant elements will be developed. This technical development is accompanied by the development of an open access software tool for design of buildings with this new type of façade and interior radiant cooling and heating elements.

The cost reduction of at least 15% is achieved by following the LowExergy9 principle and adjustment of the temperature difference between the exterior environment and the interior to a minimum value which is relevant for significant reduction of HVAC energy demand and lighting energy consumption.

The demonstrational Pavilion, which will be built at the Scientific Campus II of the Bulgarian Academy of Sciences in Sofia, Bulgaria, is designed to achieve the Bulgarian nearly Zero Energy Building (nZEB) standard. It consists of:

To simulate processes in the Pavilion, the IDA ICE software was used, which has the functionality to model sophisticated simulation applications to study the indoor climate as well as the energy consumption of the entire building. In order to enable the simulation of dynamical physical changes within the WFG facade, the software was enhanced by integrating a specific tool developed as part of InDeWaG project. The simulations were made with different combinations of glass type and position of the argon and water chambers corresponding to the three types of WFG modular units so called iThermGlass, HeatGlass and CoolGlass. The highest annual monthly average Water Heat Gain and lowest annual monthly average Internal Heat Flux are obtained for HeatGlass, which makes this module type the best choice for the local climate conditions. To estimate the effect of using WFG modules another simulation was prepared in which WFG modules are replaced by standard triple glazing windows. 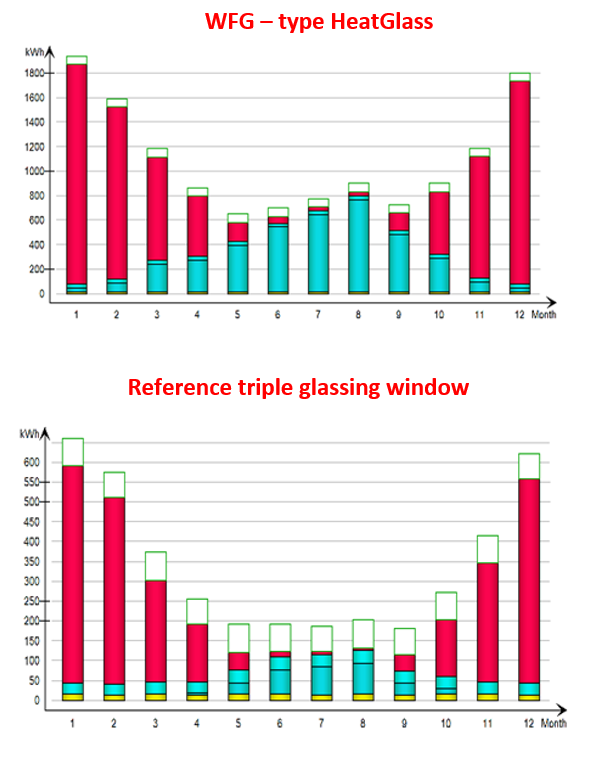 The simulation shows a significant difference in energy consumption between the WFG case and the standard triple glazing. The total peak consumption of the WFG module doesn't exceed 700 kWh on monthly bases compared to a maximum of 2000 kWh/monthly for the triple glazing.

Electricity production from the PV system is calculated by using PVGIS solar radiation database and is estimated to be 7384 kWh/year.

On yearly bases the PV electricity production will exceed the consumption of the pilot building by 3256 kWh, which makes it energy plus building, covering the nZEB standard in Bulgaria.